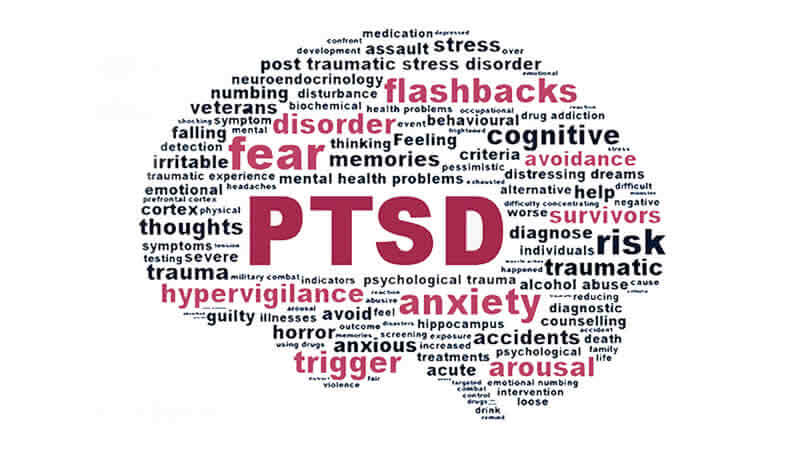 What is Posttraumatic Stress Disorder?

Posttraumatic stress disorder (PTSD) is a mental condition that develops in some people who have experienced a shocking, scary, or dangerous event. It is natural to feel afraid during and after a traumatic situation. The fear that one experiences triggers many split-second changes in the body to help defend against danger or to avoid it. This reaction is called a “fight-or-flight” response which is a typical reaction meant to protect a person from harm. Nearly everyone will experience a range of reactions after traumatic events, yet most people recover from initial symptoms naturally. Those who continue to experience problems directly related to the shocking event even after the event is long over may be diagnosed with PTSD. This may occur when an individual encounters a similar event or is reminded of the event and continues to have a similar reaction. People who have PTSD may feel stressed or frightened, even when they are not in danger.

What are the symptoms of Posttraumatic Stress Disorder (PTSD)?

While most but not all traumatized people experience short term symptoms, the majority do not develop ongoing (chronic) PTSD and not everyone with PTSD has been through a dangerous event. For example, some people who have experienced sudden, unexpected death of a loved one, can also develop PTSD symptoms, which usually begin early, within 3 months of the traumatic incident, but sometimes they begin years afterward. Symptoms must last more than a month and be severe enough to interfere with relationships or work to be considered as PTSD. The course of the illness varies. Some people recover within 6 months, while others have symptoms that last much longer and, in some people, the condition becomes chronic. A doctor who has experience helping people with mental illnesses, such as a psychiatrist or psychologist, can diagnose PTSD.

To be diagnosed with PTSD, an adult must have all of the following symptoms for at least 1 month: At least one re-experiencing symptom. These are symptoms that involve reliving the traumatic event over and over, including physical symptoms like racing heart or sweating; bad dreams or frightening thoughts.  Re-experiencing symptoms such as these may cause problems in a person’s everyday routine. The symptoms can start from the person’s own thoughts and feelings; words, objects, or situations that are reminders of the event which can also trigger re-experiencing symptoms.  To be diagnosed with PTSD, other symptoms might include at least one avoidance symptom; at least two arousal and reactivity symptoms; and at least two cognition and mood symptoms.

An individual suffering from PTSD may also experience arousal or reactivity symptoms. These symptoms are usually constant, instead of being triggered by things that remind one of the traumatic events. These symptoms can make the person feel stressed and angry or make it hard for one to do daily tasks, such as sleeping, eating, or concentrating. These symptoms may include being easily startled; feeling tense or “on edge” (DSM-5 Task Force 2013), having difficulty sleeping or having angry outbursts. Thoughts and mood symptoms can also begin or worsen after the traumatic event. These symptoms might include one having trouble remembering key features of the traumatic event; having negative thoughts about oneself or the world; having or distorted feelings like guilt or blame and having loss of interest in enjoyable activities. These symptoms can make the person feel alienated or detached from friends or family members.  It is natural to have some of these symptoms for a few weeks after a dangerous event. For instance, a study published in the Journal of Trauma Stress 2012 indicated that six months after the end of the postelection violence in Kenya, those interviewed continued to exhibit PTSD symptoms. The study indicated that on a random community-based sample of 552 impoverished youth ages 6–18 within an informal settlement in Nairobi, Kenya, had experienced war-like violence for a month following the contested presidential election of 2007. Six months after the violence ended, 99 (18%) had PTSD according to the UCLA PTSD Reaction Index (Steinberg, Brymer, Decker, & Pynoos, 2004), and an additional 18 (3%) were found to have partial PTSD due to high overall scores on the trauma symptom measures.

When the symptoms last more than a month, seriously affect one’s ability to function, and are not due to substance use, medical illness, or anything except the event itself. Some people with PTSD don’t show any symptoms for weeks or months. Because for some people these symptoms can be very distressing other symptoms may begin to show as depression, substance abuse, or anxiety.

The following is an illustration of an adult diagnosed with posttraumatic stress disorder: Alexis, a 30-year old female reported that her psychological symptoms began following an automobile accident and injuries she sustained 4 year ago. She stated “I cannot remember things; I am told I was in a coma for 3 days and I woke up in a hospital. My arm was injured, my left arm lost sensation, my leg also swelled. My left side of my body hurt, I have headaches daily and my left eye tear up. I take medicines for pain daily. I cannot lift things and I cannot work as I used to”. Her current symptoms include tearfulness, depressed and flat affect, recurrent nightmares, being fearful or avoidance in traveling by cars. She states “If I am in a car I scream if the car swerves or leans this way”. She complains she does not remember where she puts things. States “I have lost things at my house, or when I go places”.

A psychological assessment revealed that she was having a severe level of emotional distress in numerous areas, including anxiety, depression, and symptoms of post-traumatic stress. Symptoms of depression included frequent sadness, guilt, failure, worthlessness, loss of pleasure. She reported feeling disappointed in herself and could not expect things to work out for her. She blamed herself for everything bad that had happened, reported a high level of hopelessness, and seemed withdrawn.  At times she engaged in self-harm thoughts including periodic thoughts of killing herself, needing an escape from her problems, relieve from pain and lack of meaning in her life.  She also experienced severe anxiety, including social anxiety, worry/fear, and physiological symptoms.  She also reported frequent repetitive thoughts, and typically felt anxious when going out by herself.  She experienced physical symptoms ‘almost all the time’, including trouble breathing, hot flashes/feeling flushes, heart pounding or racing, breathing too fast, and panic symptoms specifically when she had to travel in a car. She also experiences severe problems with numbness or tingling in her arm, nervous and reported feeling terrified.  She had intense fear of the worst happening and of losing control. Alexis was diagnosed with posttraumatic stress disorder with dissociative symptoms and major depressive disorder. (Njuguna R, 2019).

What is complex PTSD in adults?

When trauma occurs repeatedly and often involves direct harm to the victim such as war, the trauma is called Complex PTSD. Its effects are cumulative and generally transpire in a specific setting and frequently, within a particular time frame or within a specific relationship. Trauma can occur in many forms, for instance soldiers returning from active duty in a war zone, the child or adult who lives with physical, sexual or emotional abuse or neglect, the first responder who must deal with human suffering on a daily basis and the adult who endures domestic abuse all are examples of complex trauma.

Going through persistent trauma can make an individual experience intense feeling of guilt, as if they are somehow responsible for the event(s) that are so terrifying to them. The altered sense of shame and painful self-perception is crippling. It can make the person feel isolated and hopeless, and as they feel that they are no longer in charge of themselves. Trauma by itself, can produce feelings of anger, persistent sadness and despair. In addition to these symptoms, Complex trauma can include: change in personal self-concept; distrust, suicidal thoughts; episodes of feeling detached from ones body or mental processes; isolation, guilt, shame or feelings of being totally different form other people; helplessness and feeling hopeless, becoming preoccupied with revenge or, conversely, giving total power to the perpetrator; self-harm or self-mutilation or substance use or alcoholism.

Why do some people develop PTSD and others do not?

It is essential to remember that no everyone who lives through a dangerous event develops PTSD. In fact, most people will not develop the disorder. Many factors play a part in whether a person will develop PTSD. Some examples include what we call risk factors that can make a person more likely to develop PTSD. Other factors, called resilience factors, can help reduce the risk of the disorder. For instance, factors that increase the risk for PTSD include; living through dangerous events and trauma; getting hurt; seeing another person hurt or seeing a dead body; childhood trauma; feeling horror, helplessness or extreme fear; having little or no social support after an event. Dealing with extra stress after the traumatic event such as loss of a loved one; pain and injury or loss of a job or home and having a history of mental illness or substance abuse.

Some factors that may promote recovery after trauma include: seeking out support from other people, such as friends and family; finding support after a traumatic event, yearning to feel good about one’s own actions in the face of danger; having positive coping strategies or a ways of getting through the bad event and learning from it; being able to act and respond effectively despite feeling fear.  Researchers are studying the importance of these and other risk and resilience factors, including genetics and neurobiology. With research someday it may be possible to predict who is likely to develop PTSD and to prevent it.

GET IN TOUCH WITH US